ESTHERA-GSH is supplement composed of Glutathione and Vitamin C. Glutathione is a master anti-oxidant, and a very effective whitening agent when taken in greater dosage.

GLUTATHIONE (GSH) which is a small protein composed of 3 amino acids called cysteine, glutamic acid, and glycine, produced normally by the body in response to today’s environment such as pollution in the air we breathe, water we drink, chemicals and pesticides in the food we eat that cause damages in our cells in our system. It is often referred to as Master Anti-oxidant in the body. A “small molecule made up of linked amino acids and anti-oxidant naturally produced in the body. It has been widely heralded for its importance for good health and long life, “the greater the exposure to toxins, the faster the body uses up its supply of glutathione. Without the protection of Glutathione, cells die at a faster rate, making people age quicker & putting them at risk for toxin induced diseases including cancer.” It is the most powerful anti-oxidant occurring naturally in all of 70-100 trillion cells that make up the human body. That is why it is called the master antioxidant of all other anti-oxidants such as Vitamin C, Vitamin A, vitamin E and Selenium.

The liver, intestinal tracts, especially the lungs, are organs where glutathione can mainly be found. The body harvests and collects the largest amounts of glutathione in the liver, where it is used to detoxify damaging and destructive compounds so that they can be excreted from the body through the bile.

Almost all fruits and vegetables provide good source of glutathione. It is beneficial to consume extra glutathione through supplementation.

Glutathione, body’s natural antioxidant, enhances your immune system and protects your vision; it prevents the accumulation of oxidized fats that aid in atherosclerosis, and helps in the conversion of carbohydrates into energy.

Glutathione plays a role in aging. Its level decreases with age leaving the body defenseless to damage by free radical thus increasing the rate at which the body wears down.

Glutathione has Master Anti-Oxidant Effects on the following: 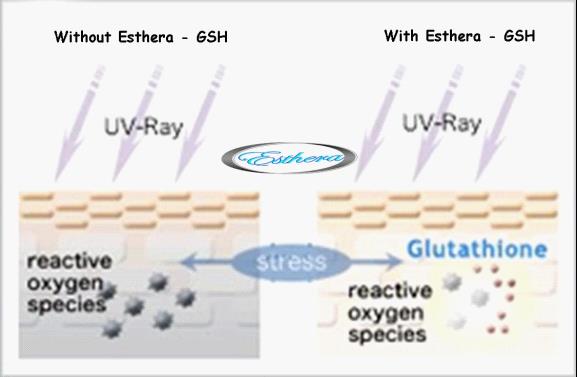